I Heart My City: Laura’s Barcelona

Italy: The Perfect Setting for a Girls’ Getaway

What to do in Rome 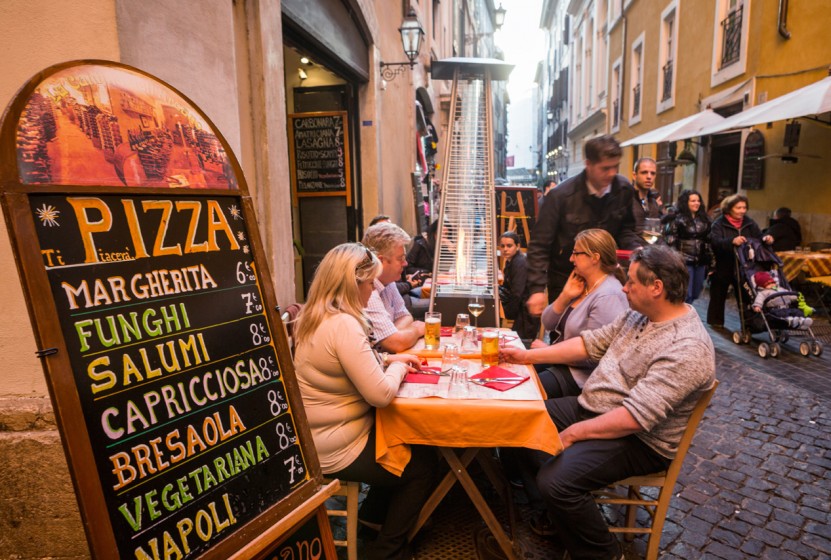 We guess that means that while you’re in Rome, go ahead and eat sumptuous Italian food (there are no calories on vacation), explore the ancient monuments while enjoying the city’s vibrancy, and have fun!

Looking for some suggestions of how to spend your time? A Monograms Local Host will give you local insight on where to go if you’re looking for a one-of-a-kind vacation: 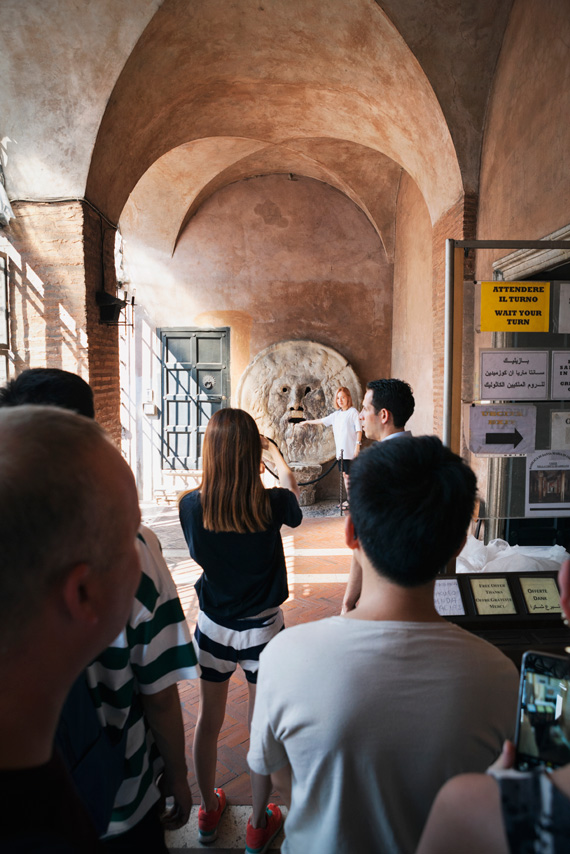 Find it in the portico of the Santa Maria church and dare to put your hand in the Bocca della Verità (Mouth of Truth) – the marble disk presumed to be the face of a river god that, legend has it, will bite off a liar’s hand.

The Ara Pacis Museum was designed by the international architect Richard Meier and houses the Ara Pacis, the 2,000 year-old “Altar of Peace” that was used (paradoxically) for sacrifices. It is a commanding work of Roman art and architecture that had been lost to civilization for centuries.

The creation of the Capitoline Museums can be traced back to 1471, when Pope Sixtus IV donated a group of bronze statues of great symbolic value to the people of Rome. The collections are closely linked to the city of Rome, and most of the exhibits come from the city itself. 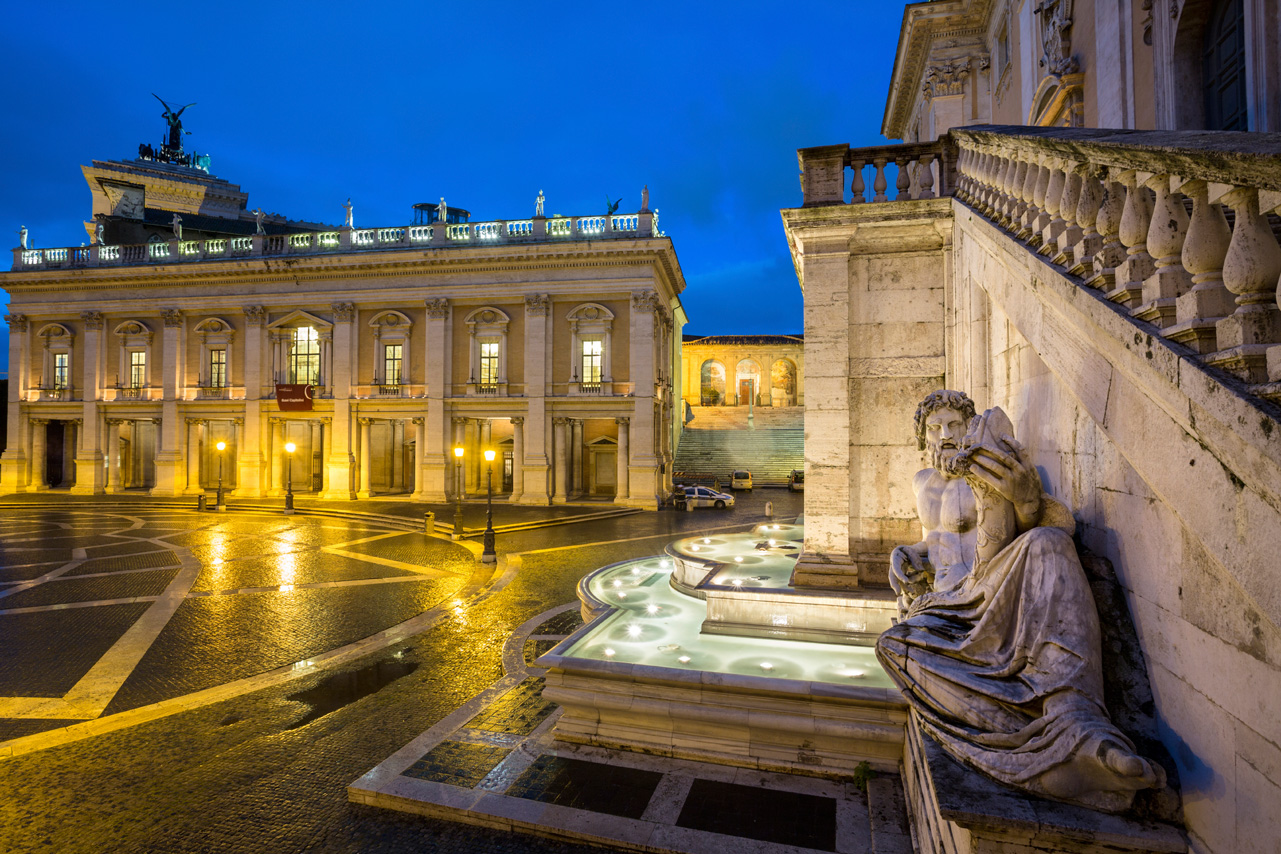 The synagogue was built from 1901 to 1904 on the banks of the Tiber, overlooking the former ghetto. The eclectic style of the building makes it stand out, even in a city known for notable buildings and structures. This attention-grabbing design was a deliberate choice made by the community who wanted the building to be a visible celebration of their freedom and to be seen from many vantage points in the city. The aluminum dome is the only squared dome in the city and makes the building easily identifiable even from a distance. Also visit the small museum nearby which depicts Roman Jewish life and ritual. 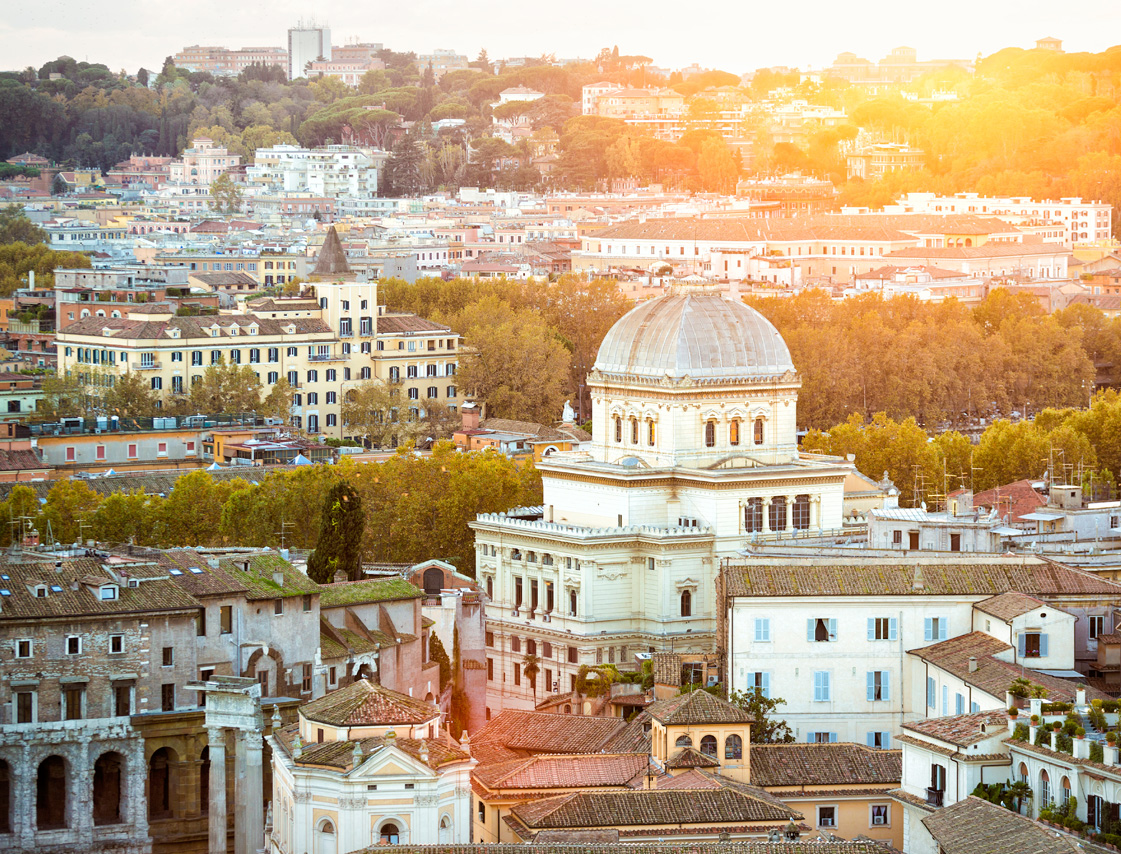 The Theater of Marcellus is an ancient open-air theater built in the closing years of the Roman Republic where people were able to watch performances of drama and song. In the 12th-century the Theater was turned into a fortress. In 1368 it was acquired by the Savelli family and later transformed into a building with private living quarters. A part of the exterior of the original theater is now visible. The Theater is one of the oldest preserved examples of an entertainment venue from ancient Rome. 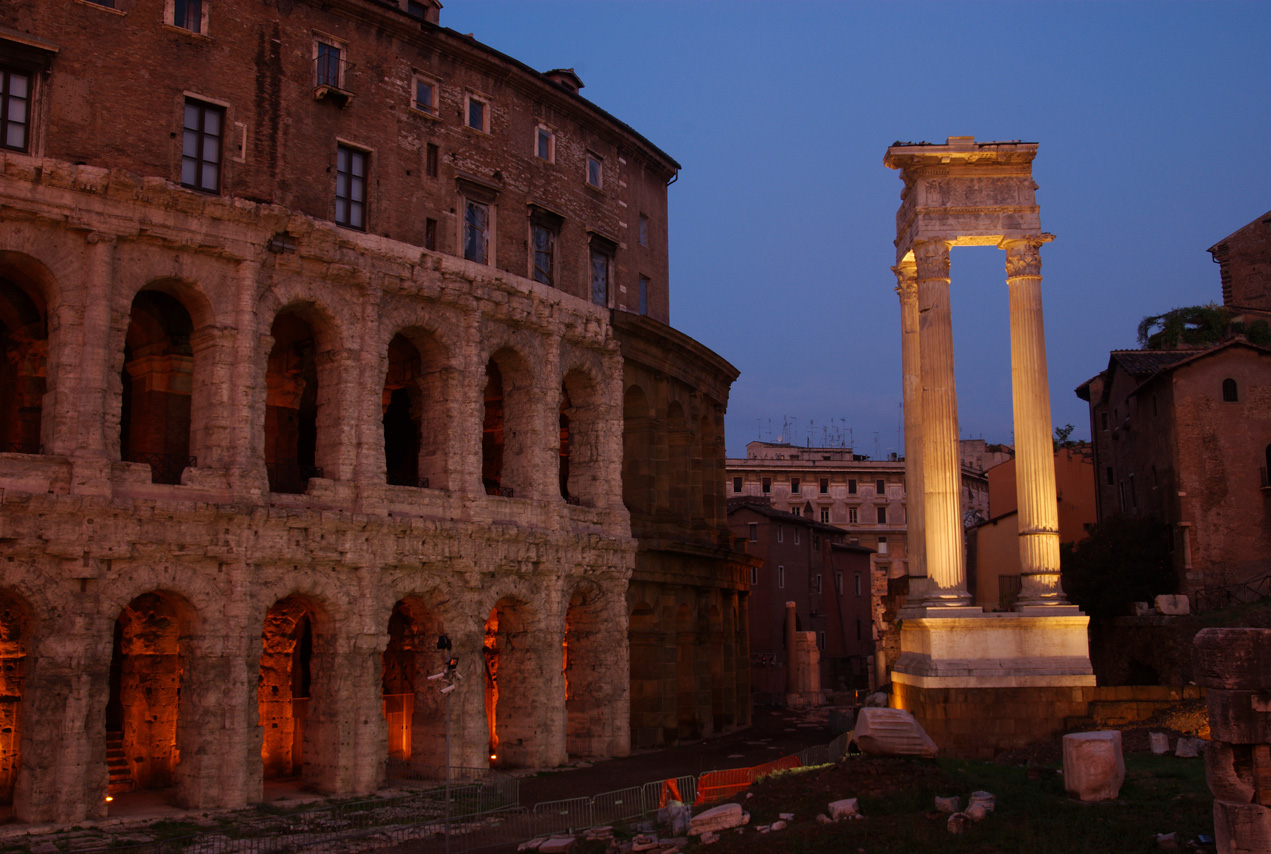 This is known as the city of seven hills, but actually Rome has more than that. Indeed, the Gianicolo (or Janiculum), the hill that affords the best view of Rome, is west of the Tiber and outside the ancient city, so it’s not counted among the ancient seven. The panorama and the silence from the top take your breath away. At noon, the quiet is momentarily broken by a single cannon shot, to mark the exact time, a tradition that dates back to the 19th century. Busts of some of Italy’s modern heroes are scattered along the pathways, and looming over everything is a gigantic statue of the great bearded hero Giuseppe Garibaldi on horseback. Families may wish to spend some time at Gianicolo Park, with its wonderful panoramic views, carousels, and puppet shows. 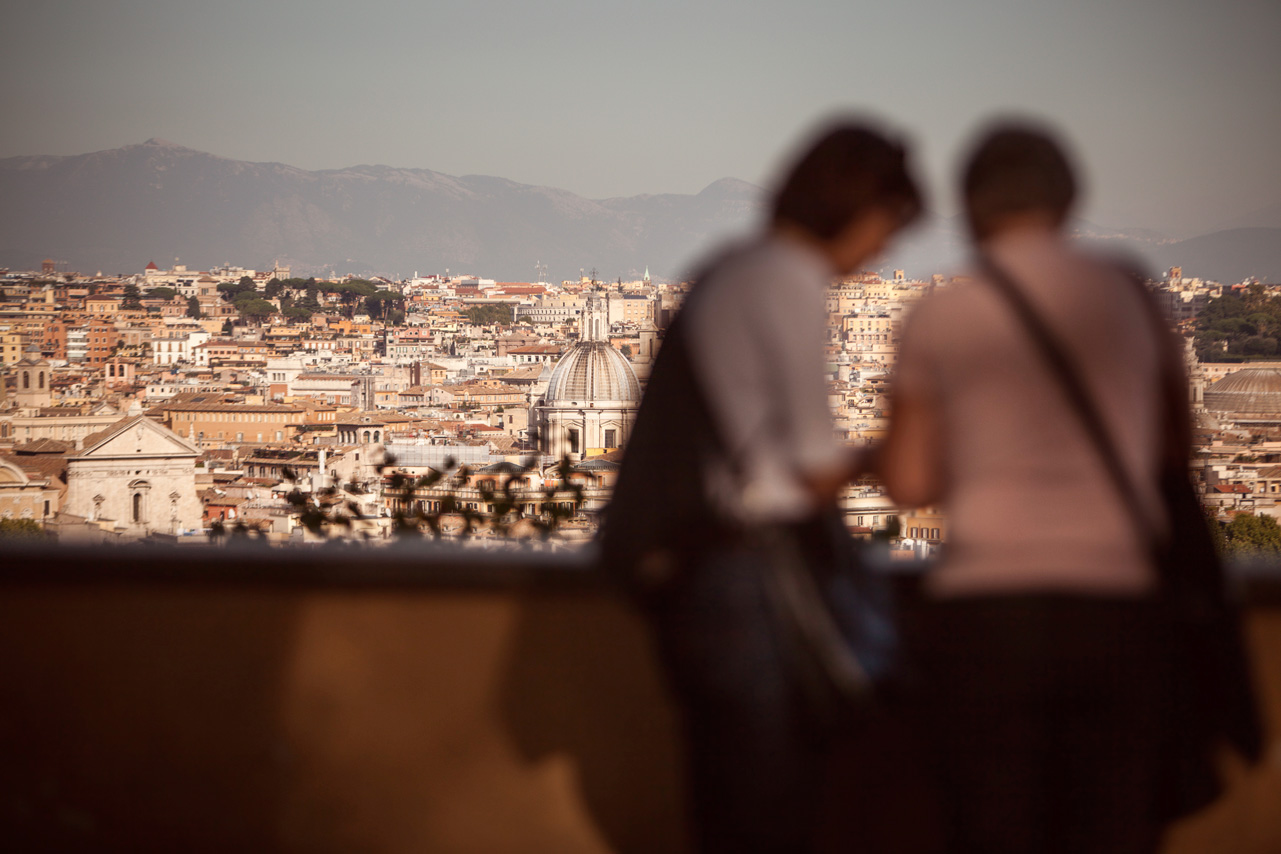 The view of Rome from Gianicolo Hill

It begins at the foot of the Spanish steps and is named after conduits (channels) which carried water to the Baths of Agrippa. Today, it is the street which contains the greatest number of Rome-based Italian fashion boutiques. Antico Caffé Greco, a historic landmark café, was established at Via dei Condotti 86 in 1760, and attracted figures such as Stendhal, Goethe, Byron, Liszt and Keats. Today, Caffe Greco remains a haven for writers, politicians, artists and notable people in Rome. Guglielmo Marconi, inventor of the radio, lived at Via dei Condotti 11, until his death in 1937. 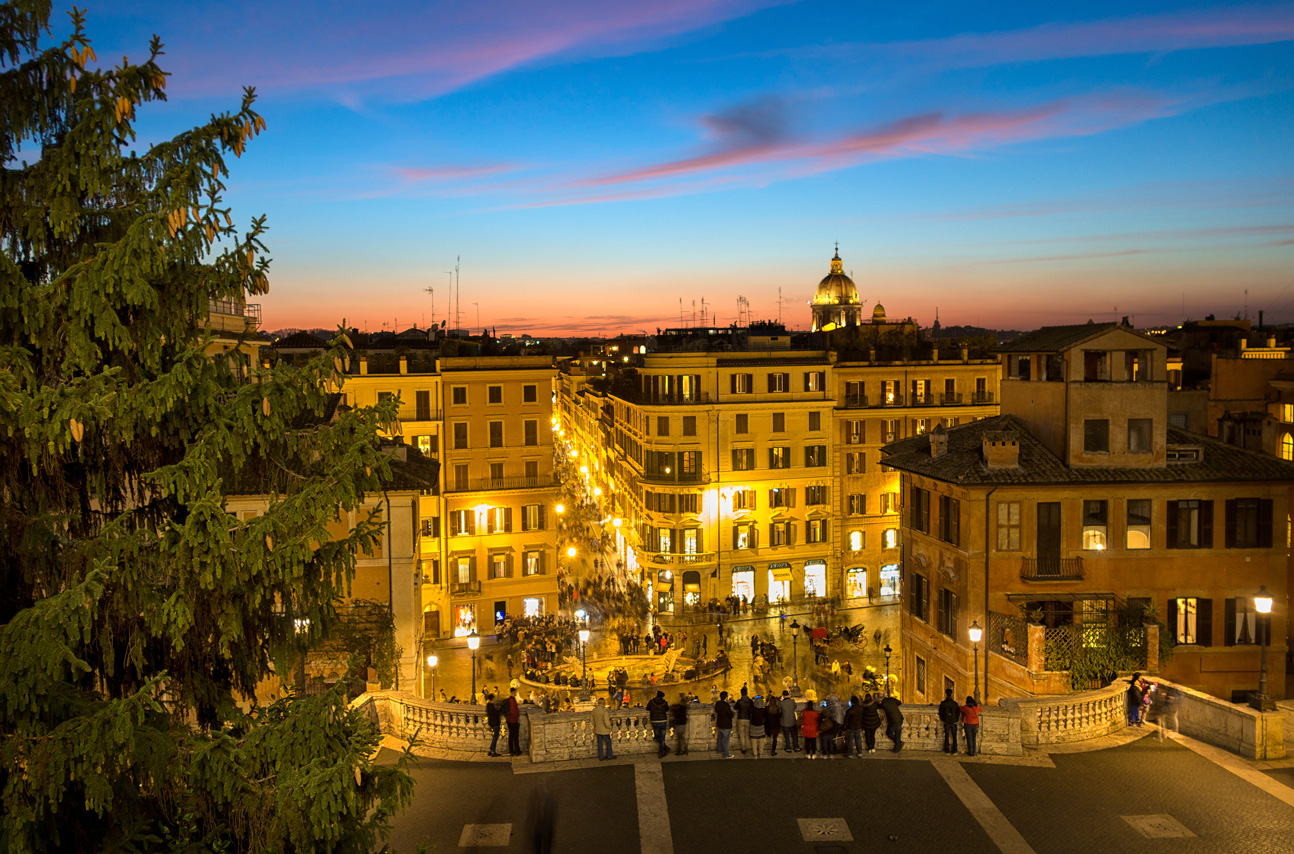 Via Condotti and the Spanish Steps at sunset

When in Rome, you should do as the Romans do by eating some of the city’s typical dishes. Try pizza alla Romana (thin crusted white pizza brushed with olive oil & rosemary); pasta cacio e pepe (pasta in a creamy olive oil, pecorino cheese and black pepper sauce); pasta e ceci (pasta and chickpeas soup); carciofi alla Giudia (fried artichokes), saltimbocca alla Romana (Veal scallops), and for dessert: Maritozzi (soft buns with raisins and candied orange peels), crostata di ricotta (kind of cheesecake made with fresh ricotta and candied fruits), Ciambelle al vino (hard doughnut-shaped cookies to be dipped in wine at the end of the meal). And don’t forget to sample the most famous delicate, white wine of the region -Frascati – produced in the nearby Roman Hills, perfect with fish, appetizers and fresh cheeses.

If you’re ready to enjoy these Roman splendors, or you want to see additional Local Host suggestions, start researching here.