Eataly: What and Where to Eat in Italy 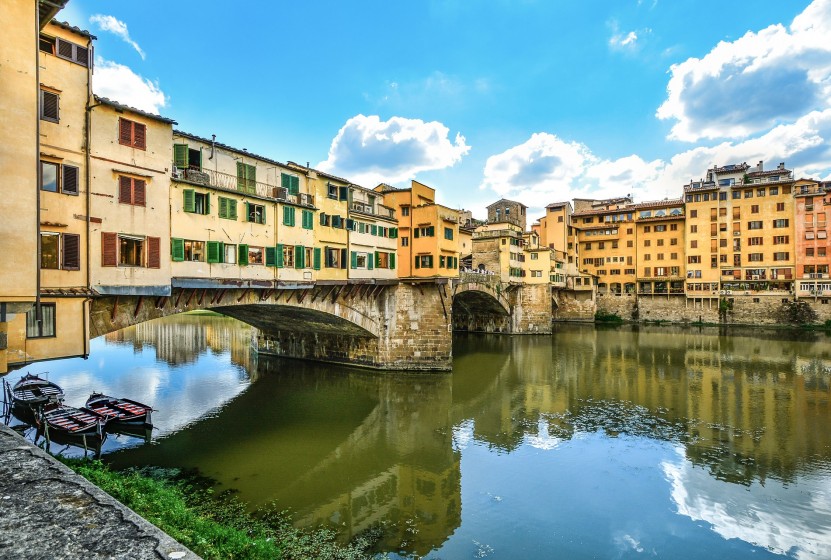 As the Nazis retreated from Florence during World War II, they blew up all of the bridges across the River Arno, except one: the Ponte Vecchio, which was evidently saved on Hitler’s personal orders. This was where he had met the Italian dictator Benito Mussolini in 1938, cementing the “pact of steel” alliance. The Führer had been so impressed by the elegant “Old Bridge,” which had graced the spot since being built in stone in 1345, that he decided to save it. Instead, the German army blew up all of the ancient buildings on either side, so that the bridge could not be used by the Allies, but the Ponte Vecchio itself was salvaged for posterity.

Today, thousands flock to this glorious arched edifice to buy gold and silver from local vendors, much as they have since 1593, when the Grand Duke Ferdinando Medici ordered that metalworkers and jewelers replace the butchers and tanners who worked there. He wanted a more pleasant walkway and was offended by the stench of rotting meat and the pungent odors of hides that were cured in horse urine and washed in the river. A bust of Benevento Cellini, the most accomplished of all Renaissance goldsmiths, stands as a reminder of this great tradition.

In its heyday, like all bridges of the period, the Ponte Vecchio was bustling with merchants and crowded with domestic residences, taverns, and shops. Today, if you visit the bridge in the early morning or at night, when the vendors’ stone-walled stalls are closed, you can see city’s ancient symbol, a stylized lily (not unlike the fleur de lis), used as a decorative pattern on the metal hinges of all the wooden shutters.

But at any time of day, make sure you look up and spot the barred round windows in the top level of the bridge. Unbeknownst to most visitors, a secret passage runs above the Ponte Vecchio. It was added by the Medici family in 1565 so that they could get from the Uffizi to the Palazzo Pitti without having to weave through the crowds and risk assassination. It is known as the Vasari Corridor after its designer, Giorgio Vasari, and its circular windows are called “the eyes of Florence.” Through them, the Medicis could spy on their subjects and even eavesdrop on conversations. It was actually in this passageway that Adolf met Benito back in 1938, in order to hatch their plans in privacy.

Buongiorno from Venice! What a spectacular way to

The Old Hill Street Police Station is a historic b

Approaching Castel Sant'Angelo from its bridge is

A picture-perfect Japanese donburi, complete with

Kicking off a London vacation in style...🥂 Ph

A stunning sunset across the rooftops of Rome = pe

One of the best things about Japan is the teeny ti

In the heart of London, you'll find a gem called L

The exterior of Florence's Duomo is so beautiful,

The peaceful Chinese Gardens in Singapore are base

Bright lights in a big city. Tokyo is an experienc

The canals of Venice seem to turn a little mysteri

Taken from its under belly, you can see just how f

The Kruger area is a must-visit while on safari. H

Could this view from St Peter's Basilica get any b