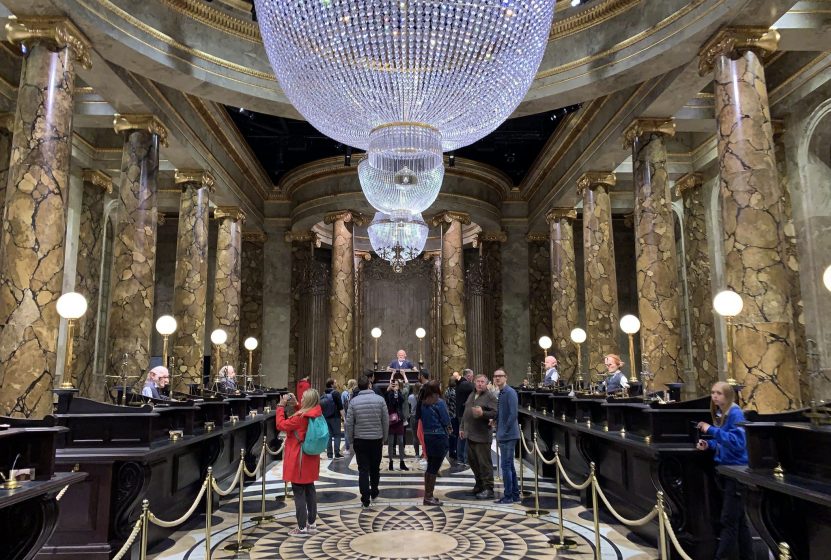 I like Harry Potter, don’t get me wrong. I bought the books as they were released, signing up well in advance to grab my coveted hardcover. I’ve watched and rewatched all of the movies and, overall, think that the messages and themes found throughout the series aren’t just entertaining, they’re meaningful and important. With all of this being said, I am far from fanatical about it all. I’m not a super fan, I don’t play Quidditch (mostly because it’s not real) and I don’t dress up in robes. So it was with a lot of curiosity and perhaps even a little apprehension that I entered the Making of Harry Potter Warner Bros. Studio tour outside of London. What I didn’t know – couldn’t have known – was how much fun the experience would be and how it very quickly became one of the best travel activities I’ve ever done.

I was in London with un-tour company Monograms Travel, reconnecting with a city I’d long neglected and realized why it figures so highly on the bucket lists of millions around the world. Today I want to share just one of the many highlights from my time in London and how Monograms made it all possible.

If you haven’t read my reviews of Monograms Travel before, they aren’t a tour company, not really. Instead they take care of major details like hotels, transfers and orientation tours, but then it’s up to the traveler to decide what they want to experience. It’s independent travel with a little bit of extra ease built in and I love the experiences this unique way of travel enables. There are a number of optional excursions offered if that’s what the traveler is looking for, and before I left home I signed up for a very special one involving a certain bespectacled wizard boy.

The Making of Harry Potter

Located in Leavesden not too far away from London, the Warner Bros. Studio in the UK was home to the Harry Potter film series for more than a decade as the 8 movies were shot and then produced. Understanding the importance and popularity of the films as they were made, the production team saved most of the iconic sets, props and costumes that were all created just for the films. Thank goodness this proclivity towards saving things for posterity, otherwise we wouldn’t have the incredible fan experience that exists today.

The experience really is just that, an experience with as much staging and atmospherics as one would naturally expect from a movie studio. Part of the joy for me was being surprised almost constantly throughout the four hours I spent exploring the site, so I’m not going to ruin that element of surprise for you. I will though share a few of my favorite aspects of the Harry Potter experience to demonstrate just how remarkable it is.

I know for me personally that watching the Harry Potter movies was a magical experience and I constantly wished that I could live in that world, even if just briefly. The experience in London grants that wish by sharing full movie sets for visitors to walk through, explore and pretend that they’ve landed themselves in the PotterVerse. Whether it’s the Great Hall at Hogwarts, Gringotts Bank or the house on 4 Privet Drive, the original sets are all there and help transform what might be a ho-hum tour into something truly mesmerizing.

The experience though goes well beyond a few movie sets. In what seems like a wonderfully never-ending series of rooms and exhibitions guests are carefully escorted through the making of these extraordinary film, plunging participants back into the celluloid universe. Whether it’s the thousands of props, costumes or art models, I learned more about filmmaking than I could have ever imagined. There are also immersive experiences, like flying a broomstick thanks to green screen technology, buying a mug of delicious butter beer or boarding the Hogwarts Express at Platform 9 ¾. If you have just a passing interest in Harry Potter you’ll be enthralled and if you’re a fan then this is truly an experience that can’t be missed.

Amazing Experience Made Even Better

Can you visit Harry Potter on your own? Of course and thousands do every week. But traveling with Monograms makes it just so much easier. The studio is about 45 minutes outside of London and without a car getting there is no easy feat. The experience organized through Monograms has so many positive features that I can’t imagine having visited without their help. Since this is a very popular spot, Monograms helped me arrange things weeks in advance so that I was guaranteed a time slot to visit. The tour included transportation to/from London, a timed ticket and lots of advice about how to best experience the tour. It was easy and I didn’t have to worry about anything. Ultimately, that’s the great benefit of traveling with Monograms. They simply take away that stress and concern which can oftentimes derail an entire trip. They’re not overbearing and guests can choose to do as little or as much as they want to. But what one does decide to organize through Monograms is almost always guaranteed to be a fun and painless experience.

I hope that I’ve been able to properly share just some of the magic I felt at the Making of Harry Potter outside of London. I was honestly surprised by how much I enjoyed the experience, which leads me to believe that this is truly one of those activities almost anyone will love.

Did you know that Lake Tahoe is deep enough to cov

How delicious does this bowl of Okinawa soba noodl

Choura Tannery is the largest of three tanneries i

Amboseli National Park is well-known for its large

The awe-inspiring Gap of Dunloe makes for a superb

Fresh pasta and an Aperol Spritz - a quintessentia

Along the Seine River in the Normandy region, you'

Caipirinhas by the beach - a must-do when in South

Happy New Year! We hope 2021 brings you a chance t

As the sun sets and we farewell a tumultuous year,

Ever dreamed of seeing a bear in the wild? Alaska

Is it even Christmas if you don't have a beautiful

Sipping on a mulled wine, and tasting that first d

Ah, Paris! Although beautiful at any time of the y